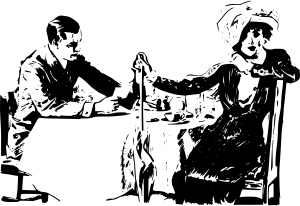 A brand new dating survey has revealed the top three faux pas to avoid on a first date. In a poll of hundreds of singletons, a trio of conversational errors were deemed to be the biggest barrier to a second date, easily topping niggles such as talking on a mobile or texting during the meeting, tardiness and dress sense.

In the study, carried out by elite dating agency Bowes-Lyon Partnership, more than 200 daters were asked what they would find most off putting on a first date. All agreed that a partner who talked non-stop about themselves was unattractive, unappealing and the quickest way to bring the date to a premature end. Female respondents were most vocal on this matter, with 100% saying that men who regaled them with life stories, career histories and family tales on the first date would be unlikely to get a second chance.

Those who talked about previous relationships and recent exes were just as likely to be refused a second date, as was anyone who was negative – examples from respondents ranged from their date moaning about a bad day at work, griping over a recent tax bill and anger at getting their heel caught in a drain on the way to the bar.

Dating expert Natalie Bystram, co-founder of Bowes-Lyon Partnership said, “The results of our dating survey have been a real eye-opener in terms of where daters draw the line and what pet hates are enough to bring a budding relationship to a halt almost before it’s started. People talking non-stop about themselves was particularly problematic for our female respondents, who complained much more then male participants about the ‘me, me, me’ conversation. Obviously it’s good to be open and talk in moderation about yourself, but it needs to be balanced with relaxed questions to the other party as well as lots of listening.

“The same applies to talking about an ex partner, which was also a massive stumbling block for many. It’s important to be open but nobody wants to be a therapist on a first date or to be given the impression that feelings are still lingering. We all lead busy lives and no one wants to feel like their time is being wasted on someone who isn’t really ready emotionally.
“Keeping things upbeat was also a big priority for those meeting a potential new partner for the first time. Our survey findings were very clear; unless you can see the funny or positive side of a bad situation, keep it to yourself, at least at the start.”

Based in London, Bowes-Lyon Partnership is a professional dating agency which specialises in bringing accomplished individuals together. As well as the matchmaking service, members also enjoy unrestricted access to a crack team of dating experts, including life coaches, stylists, lifestyle gurus, health and fitness consultations.