At Bowes-Lyon Partnership, we always recommend to our members to keep a first date something light and fun. But rather than a quick glass of wine in a local pub, which can feel a little rushed and not particularly special or a long drawn out meal where the pressure can be high, a nice middle ground is perhaps a cocktail in a smart bar – there’s much more thought in this type of venue but at the same time if you feel the spark isn’t there you aren’t spending a long drawn out evening together.

For a second or third date, a meal can be a great idea, where you can spend more time getting to know each other. London has some hidden gems you might like to consider to make your date one to remember!

London is one of the world’s cocktail capitals with a wide range of cocktail bars to choose from. New bars appear on a monthly basis, almost all bringing something unique and exciting to the scene, attracting some of the best bartenders in the world. 2011 has been a great year for new cocktail bars in London, and some of the best are below:

This bar is the second opening by Tony Conigliaro and Camille Hobby-Limon . Their first bar, 69 Colebrooke Row, has received high acclaim in the time that it has been open. 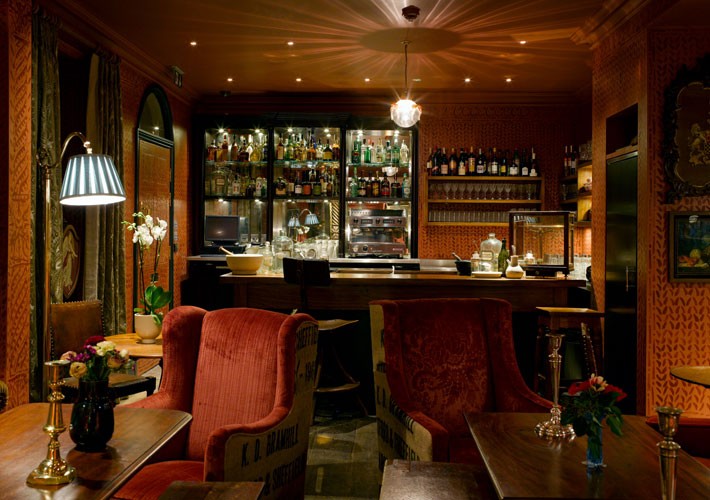 The venue is designed around ‘Aunt Wilhelmina’, a crazy old aunt whose trinkets and artefacts from her global travels make the Zetter a most unusual venue. The cocktail menu is short but perfectly formed. Each cocktail is the result of a specific concept, and is the product of multiple experiments in Tony’s Islington based lab to get the final libation just right. Expect unusual ingredients, and the influence of many different techniques and fields.

Nightjar is a beautiful bar hidden away in a basement in Old Street – the perfect place to escape the hustle and bustle of London. 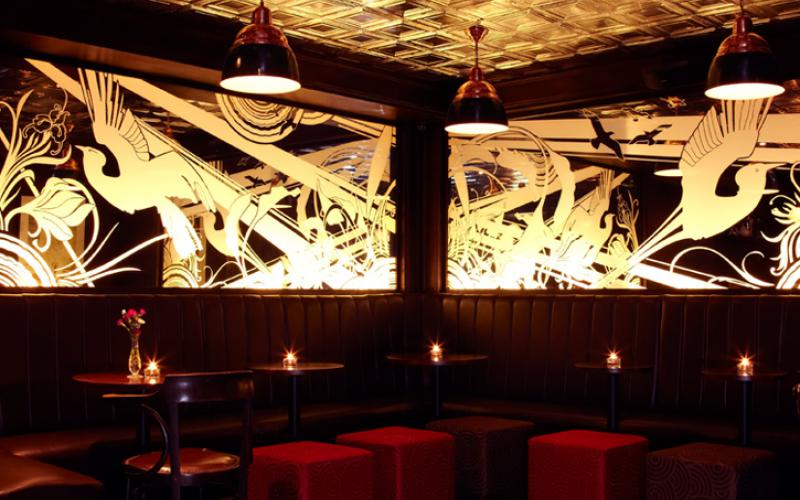 The bartenders at Nightjar take a lot of care and attention when it comes to making their cocktails. They’re executed with flair and are garnished with some of the most insane but beautiful garnishes I’ve ever come across. Nightjar is a great place to relax with a drink alongside laid back jazz and brilliant live music on Wednesdays, Thursdays and Saturdays.

The Worship Street Whistling Shop is also a new venture from a group who have enjoyed previous success on the London bar scene – Fluid Movement. The Whistling Shop is quite different from their first venture (Purl in Marylebone), think less ‘whiz bang pop’ and more cocktails that are designed to play with your senses in the most intriguing way.

The concept is a Victorian Gin Palace for the 21st Century, putting a modern twist on classic cocktails. Their barrel aged cocktails behind the bar are a real treat, along with some true gems from the main menu. Book into the Emporium for a truly unique experience unlike anything you’ve ever seen/heard/smelt before!

LCC is a wonderful, fun bar with great cocktails and some of the most friendly and welcoming staff you’ll find in London. They’ve got great quality bar snacks, but then you’d expect that given the fact that Raymond Blanc was involved in establishing the venue. 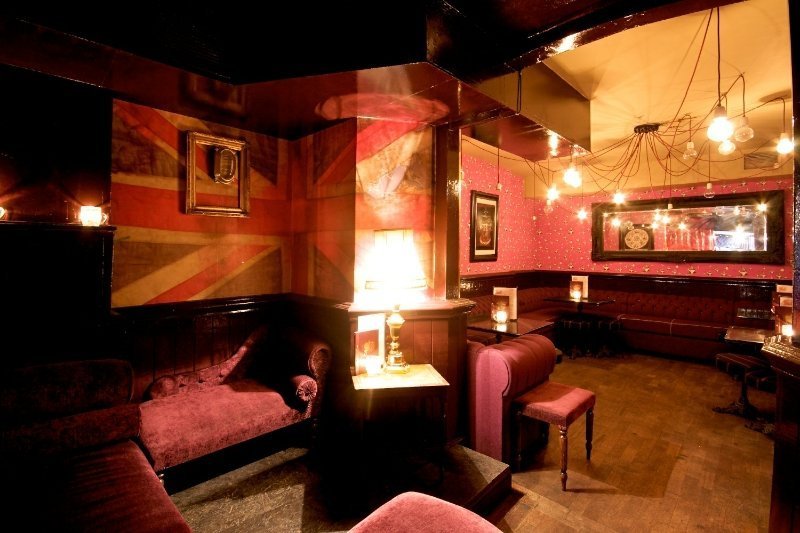 It’s a classic good time bar with all the usual suspects on the cocktail menu. The ‘from the pantry’ section mixes ingredients from the kitchen with the spirits behind the bar to great effect, especially the bacon and egg Martini. London Cocktail Club is the kind of bar where you lose track of time and end up leaving far later than you intended, with a wobble in your step and a huge smile on your face!

The Mayor of Scaredy Cat Town combines great music and atmosphere with good quality cocktails. Taking inspiration from some of the speakeasies of New York, the entrance is hidden through a Smeg fridge in the new Breakfast Club venue just off Bishopsgate. 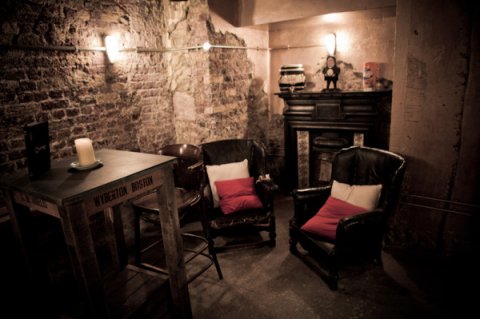 Thankfully they’ve managed to create a fun and quirky bar with great original cocktails on the menu alongside some of the usual suspects. Their bloody Mary station on a weekend is perfect to compliment the brunch on offer upstairs too.

Address: 12-16 Artillery Lane (in the basement of the Breakfast Club), London, E1 7LS

The Experimental Cocktail Club brings the concept of the original Paris bar over to London, which opened earlier this year to a lot of excitement. The ECC is a beautiful bar with ornate wallpapers, mirrored tables and long, dark comfortable seats. The cocktails are fantastic, however not quite as experimental as you’d expect. They also have an impressive range of vintage spirits behind the bar which, if you’re feeling flush, they can whip up into a vintage cocktail for you. 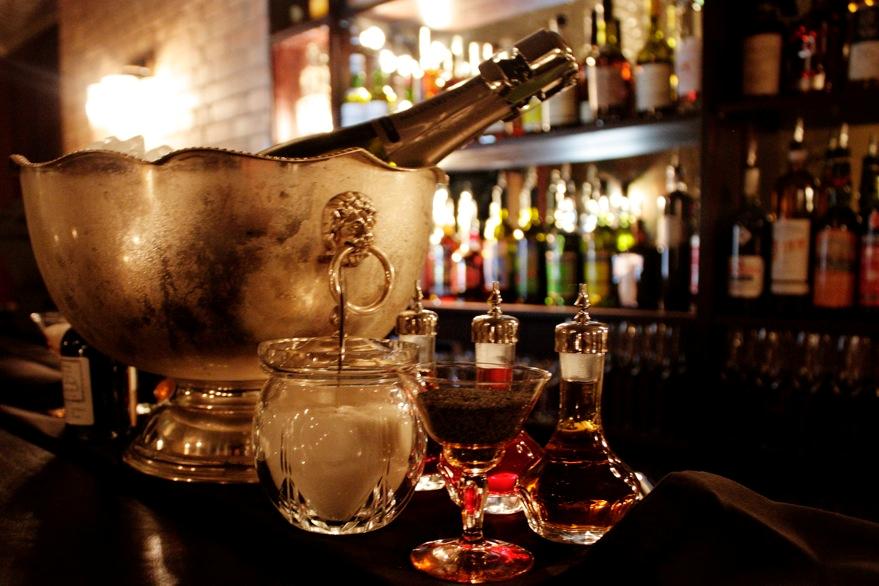 A bar where you definitely need to book and use a fair amount of charm and skill to navigate the doorman!

Another very new addition to London which is well worth keeping an eye on is:

Shaker & Company has just opened on the cusp of Camden & W1. The bartenders are all trained by the world renowned Shaker Bar School, so they certainly know their stuff. The venue has a relaxed, easy-going ambience where everyone will feel welcome whether you’re looking for a cocktail or a pint. 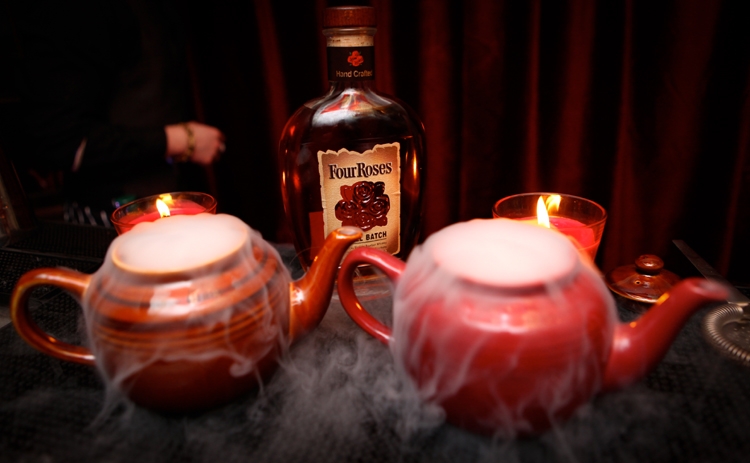 Downstairs sees monthly residences by spirit brands who can transform the space into whatever wonderful hideaway they choose. This bar may be a little bit off the beaten track but it’s well worth a visit!

London has witnessed the addition of two new upscale hotel bars over recent months. Bar 45 at the Dorchester Collection’s new hotel in Mayfair, 45 Park Lane, and Bassoon Bar at The Corinthia Hotel, both of which are great additions to London’s hotel bar scene.

A British brassiere called Manson at 676 Fulham Road in London. The new chef Alan Stewart, who previously worked at Launceston Place and Michelin starred Chez Bruce, took over the command of the kitchen in October. He is championing a ‘field to fork’ philosophy of local and seasonal produce, and so the menus are constantly changing.

Many of the ingredients are picked from the restaurant’s own allotments and Britain’s woodland and hedgerows. The kitchen staff bake their own bread twice a day, smoke their own meat and fish, butcher the whole animals and even churn their own butter.

The menu is so fabulously British that sitting in a busy London restaurant you could close your eyes and imagine a relaxing weekend in the countryside and the beautiful scenery where the ingredients come from!

Manson’s warm light, taupe and cream colours, wood-panelled bar, chestnut leather banquette seating and wooden tables create a cosy and quite grown-up atmosphere. It’s a perfect place for dinner on a dark winter night. In warmer weather, the brasserie’s doors open out onto the Fulham Road for alfresco dining. 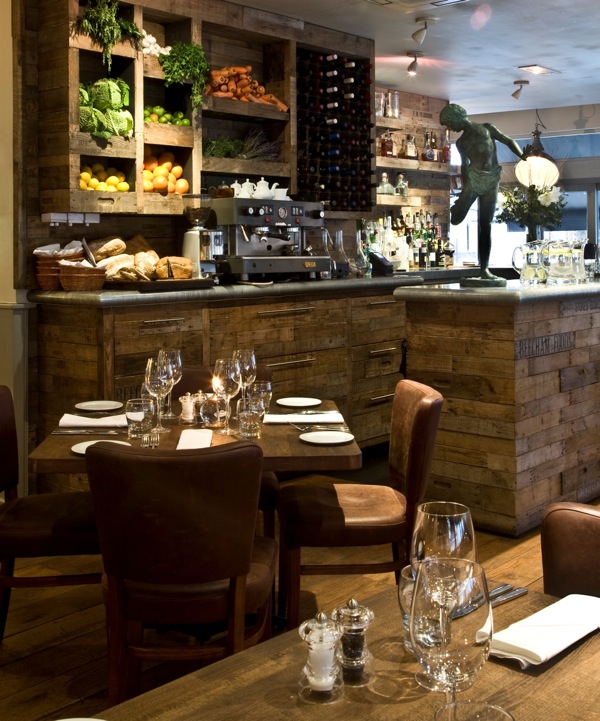 Having spent several decades in the gastronomic wilderness, steakhouses are currently enjoying a spectacular renaissance, with a new breed of sophisticated, contemporary and unapologetically glamorous restaurants.

In London the leading proponent of this revival has been the burgeoning Hawksmoor empire, with its emphasis squarely on meat of British provenance. But last September saw the arrival of a New World contender in the form of Wolfgang Puck’s CUT at 45 Park Lane. A legend on the US dining scene, Puck’s reputation most definitely preceded him and his first UK venture was one of the most hotly anticipated openings of 2011. 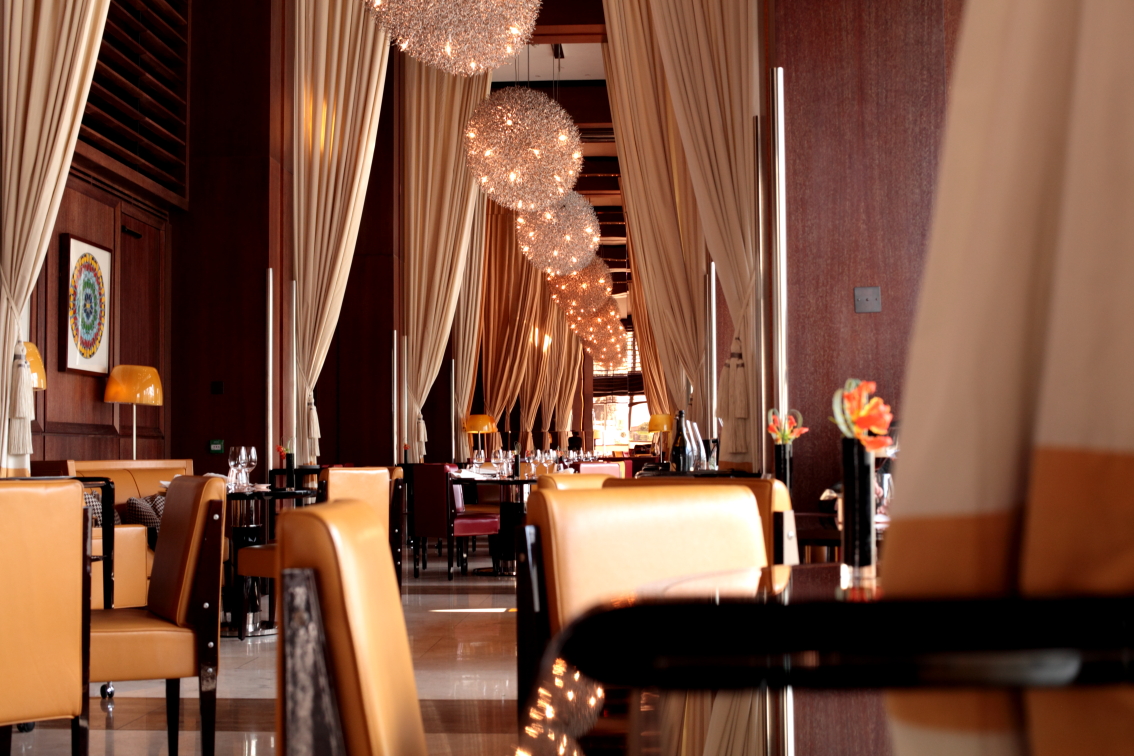 Housed in one of Mayfair’s most prestigious addresses, the main restaurant occupies the ground floor, although there’s a bar-dining option available in the library on the floor above. Mirrors elongate an already long, thin dining room but the double-height ceiling offsets any sense of claustrophobia and clever use of curtains, booths and panels inject intimacy into the grandeur.

The event (no other word comes close) began with moreish Parmesan breadsticks and an amuse bouche of blue cheese pastries, washed down with a deliciously crisp glass of Billecart Salmon Reserve Brut.

So the next time you feel the need to splurge on a fine dining experience but ‘morsels of this’ and ‘soupçons of that’ simply won’t cut it, you know where to go.

Gillray’s Steakhouse & Bar will aim to ‘celebrate the best of English’ when it launches at the end of March 2012 at County Hall. The name derives from James Gillray, a famed caricaturist of the late eighteenth century, whose work will be exhibited on the walls of the restaurant and bar.

The menu will feature 35-day dry aged Hereford Cattle from the Duke of Devonshire’s Bolton Abbey Estate in Yorkshire, with the signature dish being the 1000g ‘Bulls Head’ steak a 1000g-butterfly cut, double rib steak served with the bone in. 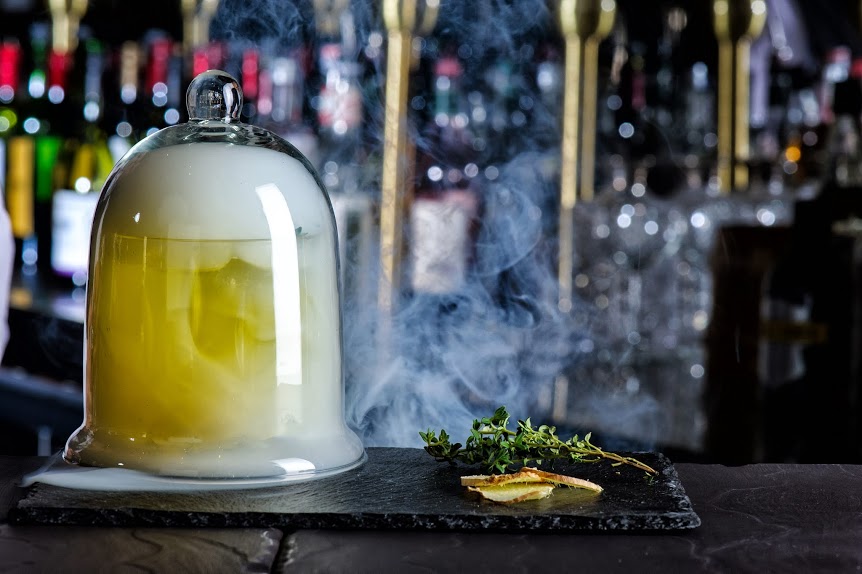 The bar will offer “a sophisticated and stylish Thames-side destination, featuring one of the finest selections of gin in London”.

Aubaine’s most recent opening is on Dover Street in Mayfair, ideally placed for the shops on nearby Bond Street. Described as a ‘contemporary French Provencal bistro, boulangerie and patisserie’, the restaurant’s all day menu features a mix of Mediterranean dishes. 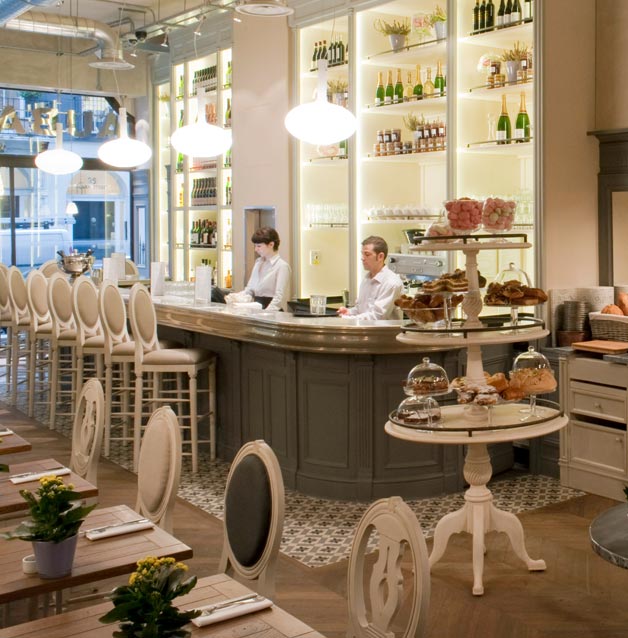 The 80-cover restaurant also features a long bar, which seats up to 15, and a 25-seat atrium at the rear of the restaurant that will open as a covered terrace during the summer months.

Flambé Menu at The Drift 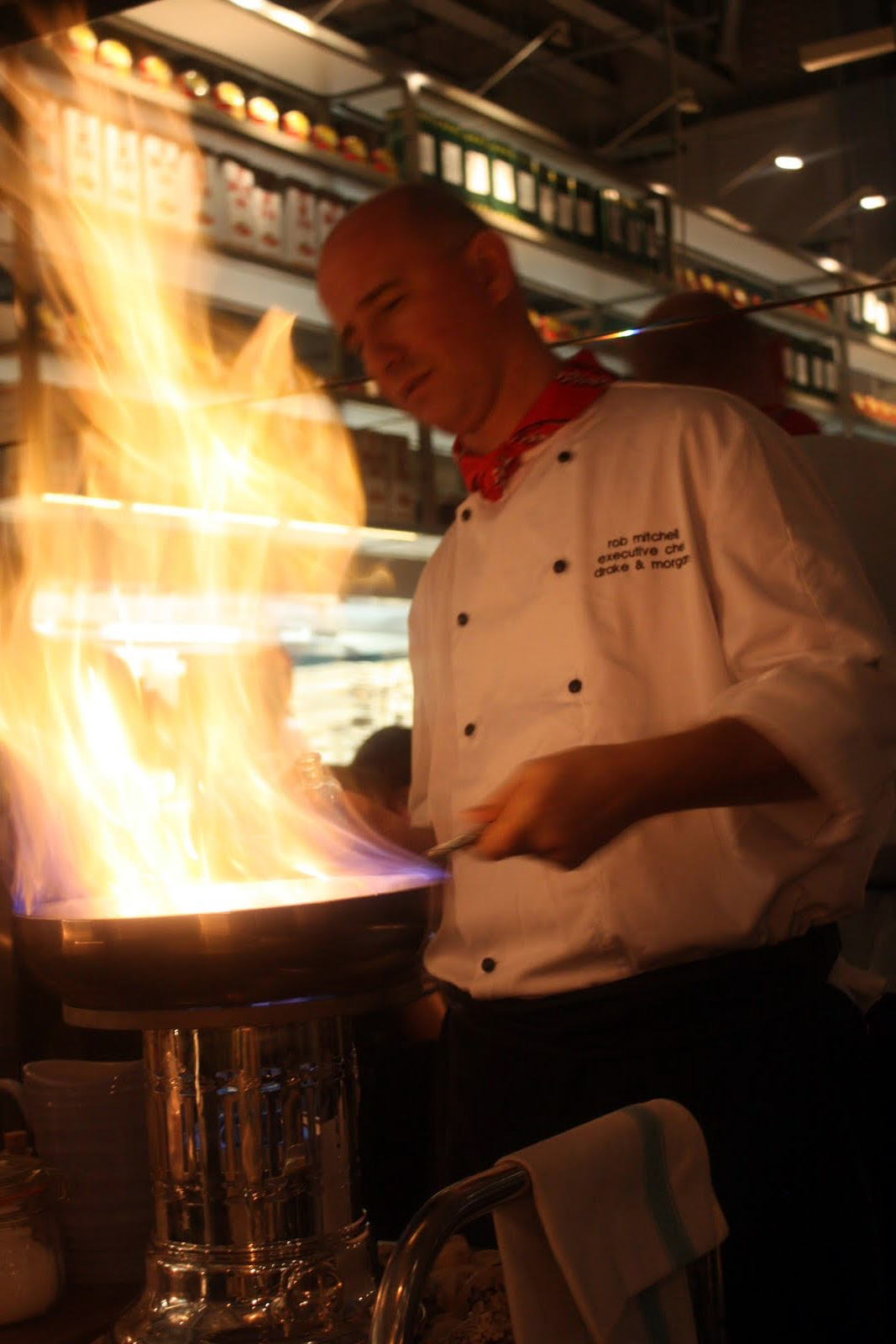 Corrigan’s Mayfair is reminiscent of London in a fashionable era, when dressing up was de rigueur, and supper in town was full of excitement and anticipation. A well-made dining room built to last and a menu as timeless as they come, Corrigan’s is the perfect place to go for Sunday lunch. 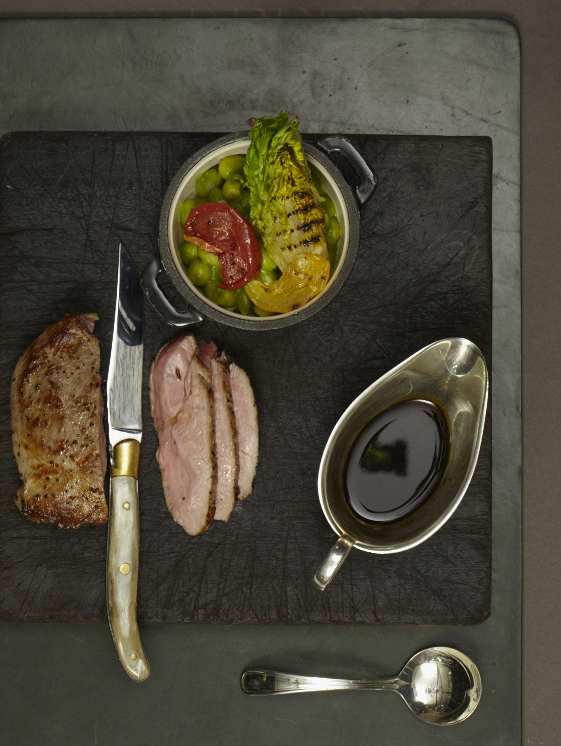 The Staff at Corrigan’s Mayfair are on hand unquestionably and service is seamless and elegant.

The menu is classic, and doesn’t attempt to radicalise the traditional meal.

For Sundays and for tradition, Corrigan’s Mayfair has well-earned its reputation as one of London’s finest restaurants.

Find out if Bowes-Lyon Partnership can help you find your perfect match by booking a complimentary consultation today.

Thank you to Bowes-Lyon Partnership’s preferred London concierge, Bon Vivant,  for their fabulous contribution to this post!